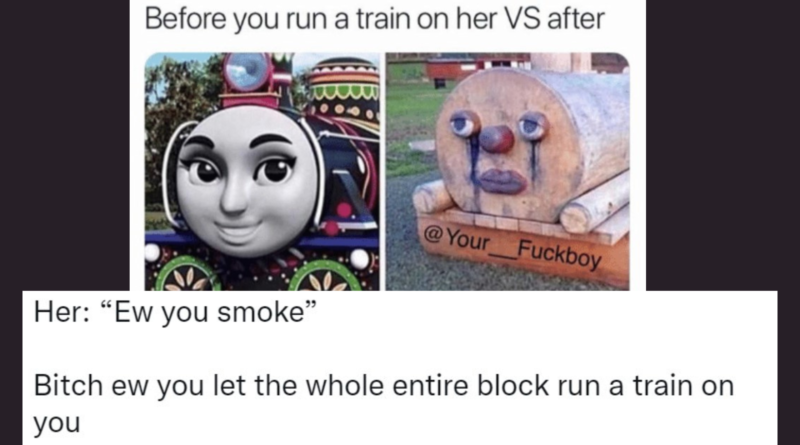 What was your first thought when heard someone saying running a train? Well, I thought the person is going to run a train I mean the actual train.

What Does Running a Train Mean?

Running a train is nothing but where a single woman is involved in sexual activity with many men. (more than 2)

But run a train on only involves 2 or more men and single woman.

Should You Try Running a Train?

Running a train is nothing new, but it’s still something that can get your heart racing. For those who aren’t familiar with the term, running a train is essentially when a group of men take turns having sex with a single person.

It might sound like a daunting task, but if you’re up for the challenge, here are a few tips to make sure everyone has a good time.

First and foremost, it’s important to establish consent among all of the participants. This means that everyone involved should be willing and enthusiastic about taking part in the train.

If someone is feeling hesitant or uncomfortable, it’s important to respect their wishes and stop what’s happening.

Once everyone is on board, it’s time to get down to business. The key to having a good time is setting up some ground rules ahead of time. This could include things like how long each person gets to stay in the “hot seat,” or whether or not folks are allowed to switch around.

It’s also important to make sure that everyone is comfortable with whatever sexual activities are taking place.

If everything goes according to plan, running a train can be an incredibly fun and exhilarating experience. But if things start to go south, it’s important to know when to call it quits. Nobody wants to be in an uncomfortable or dangerous situation, so be sure to keep an eye on your fellow sex partners and intervene if necessary.

How to keep the excitement going while running a train sex

Let’s say there are 5 men who would like to run a train on a single woman. Each guy will have vaginal sex with the woman but here is a tip to run the train for a long time.

Can you use run a train while speaking to others?

Running a train can be offensive sometimes. But run a train also means to dominate, advancing or conquer something. The term run a train can also be used in sports, video games or in any kind of competition.

So as you see it may be mainly used as a sex term but it can also be used otherwise as well.

But we suggest you not to use the term in a formal setting. Here is a tweet from Charlie kirk tweeting a response to the tweet posted by Alexandria Ocasio-Cortez.

After this tweet by Alexandria Ocasio-Cortez, people started searching for what does running a train even mean.

The term run a train was originated way back in 1949 but included in the urban dictionary only in the year 2003.

As you can see from the below Google Trends graph, running a train became popular only in recent years.

Here is how you can use running a train in sentences:

He’s running a train on that girl over there.

They were running a train on each other all night long.

I’m running a train on your sister!

Please run a train for me this evening.

Well, now that you have come to know the meaning of running a train why not try it if you are interested in this. Grab your friends who would do this and give running a train a try! What is Group Sex? How Common is it?